We want to find better ways to support people suffering with mental health challenges, and we believe we’re onto something important. 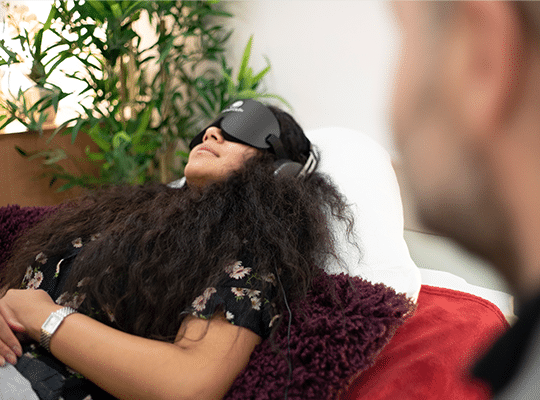 Re-enactment of a psilocybin therapy session at our study centre in Bristol, UK

Psilocybin therapy is an approach being investigated for the treatment of mental health challenges. It combines the pharmacological effects of psilocybin, a psychoactive substance, with psychological support.

Psilocybin is an active ingredient in some species of mushrooms, often referred to as ‘magic mushrooms’. We have developed a synthesised formulation of psilocybin, COMP 360, and are investigating the effectiveness of psilocybin therapy, initially in treatment-resistant depression.

Early studies conducted in pioneering academic centres have shown signals that psilocybin could be a safe and effective medicine for patients with depression, anxiety, addiction and other mental illnesses, when administered with psychological support from specially-trained therapists.*

What happens during psilocybin therapy?

We are running a rigorous, large-scale clinical development programme of psilocybin therapy for depression, including a phase IIb study for treatment-resistant depression, across Europe and North America. For more information, see ‘our clinical trials’.

The psychological support element of the therapy is considered to be as important as the pharmacological effects of psilocybin. All therapists in our research studies are carefully trained through an FDA-approved programme. Learn more about our therapist training programme.

In these first preparation sessions, the therapist and patient get to know each other and form a trusting relationship, so the patient can feel supported and at ease during the psilocybin session.

The patient lies down on a bed in a comfortable room, designed specifically for the session. They receive a dose of psilocybin in a capsule. During the experience, patients listen to a specially designed music playlist and wear an eye mask, to help them focus internally. The psilocybin experience typically lasts 6-8 hours. A therapist and an assisting therapist are present throughout the session.

Patients are encouraged to discuss their experiences of the psilocybin session. The goal is for patients, with guidance from their therapist, to generate their own insights and ideas from the experience to change unhelpful emotional and behavioural patterns.

This timeline sets out the psilocybin research story over the past few decades.

Click on the icons below to see the related publications

Our therapist training programme has been designed by leading experts from the fields of psychology, psychiatry and psychedelic therapy research, and approved by the FDA for research purposes.

This site uses functional cookies and external scripts to improve your experience.

NOTE: These settings will only apply to the browser and device you are currently using.

These cookies are required for basic site functionality and are therefore always enabled. These include cookies that allow you to be remembered as you explore the site within a single session or, if you request, from session to session. They help make the shopping cart and checkout process possible as well as assist in security issues and conforming to regulations.

These cookies are necessary for the website to function and cannot be switched off in our systems. They are usually only set in response to actions made by you which amount to a request for services, such as setting your privacy preferences, logging in or filling in forms. You can set your browser to block or alert you about these cookies, but if you do so, some parts of the site will not work. These cookies do not store any personal information.